The Danger of Chores - An Experiment 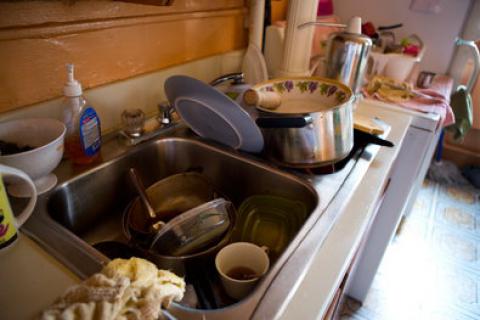 Like many of you, we have a full and busy house.  We have five teens, 18, 16, 16, 14 and 14 years old.  We run our businesses out of our home and everyone has activities and places to go.  Our "kids" are becoming young adults.  So why don't they help out around the house????  Because of chores.  That is right - if it isn't their "job" then it isn't their job.  Additionally for our special needs kid, it is okay to leave a mess in a place that is someone else's responsibility because it is then their job and not hers.

UGH!!! So all the years of having chores and trying to teach responsibility and a servant heart - they got "not my job".  So I, against my husbands better judgement, decided to do an experiment - let's call it Personal Responsibility and Serving.  Where each person does what - cleans up after themselves.  Yes - just that.  You make a mess, you clean it up.  Sounds simple right.  Well everyone in the house knew there would be some who were not willing to do so, which then gave opportunity to serve - but then also reinforces to the lazy ones that someone will do it for them - thereby not learning responsibility.

My kids used to put their dishes in the dishwasher and used to do these things when they were younger.  Now that they are teens that has changed.  Yes - they are busier - but not so much that they can't take a few min to clean up after themselves.  You see the idea was - if they needed to put a dish in the dishwasher - but the dishwasher needed to be unloaded - they would take the 5-7 min to unload, put away and put their dirty dish in the dishwasher.  This proved to be too much after four weeks.  I literally had the opportunity to show one of my 16 year olds that he can put the dishes away while waiting for a pot of water to boil - instead of standing around doing nothing when something clearly needed to be done.

All of this to say - I have no answers - I thought I was doing things right, chore charts and positive reinforcment when they were younger, priveledges when they became middle school age, etc.  I thought I did them a disservice - but now I see - there may not be a right way to get kids to do their part until they are more mature and on their own.

Let me know how you do it.

Do you need some house management help, organization or just some mom support.  Check out the Build Your Bundle sale - limited time only - starts 5/6/2020. (referral)